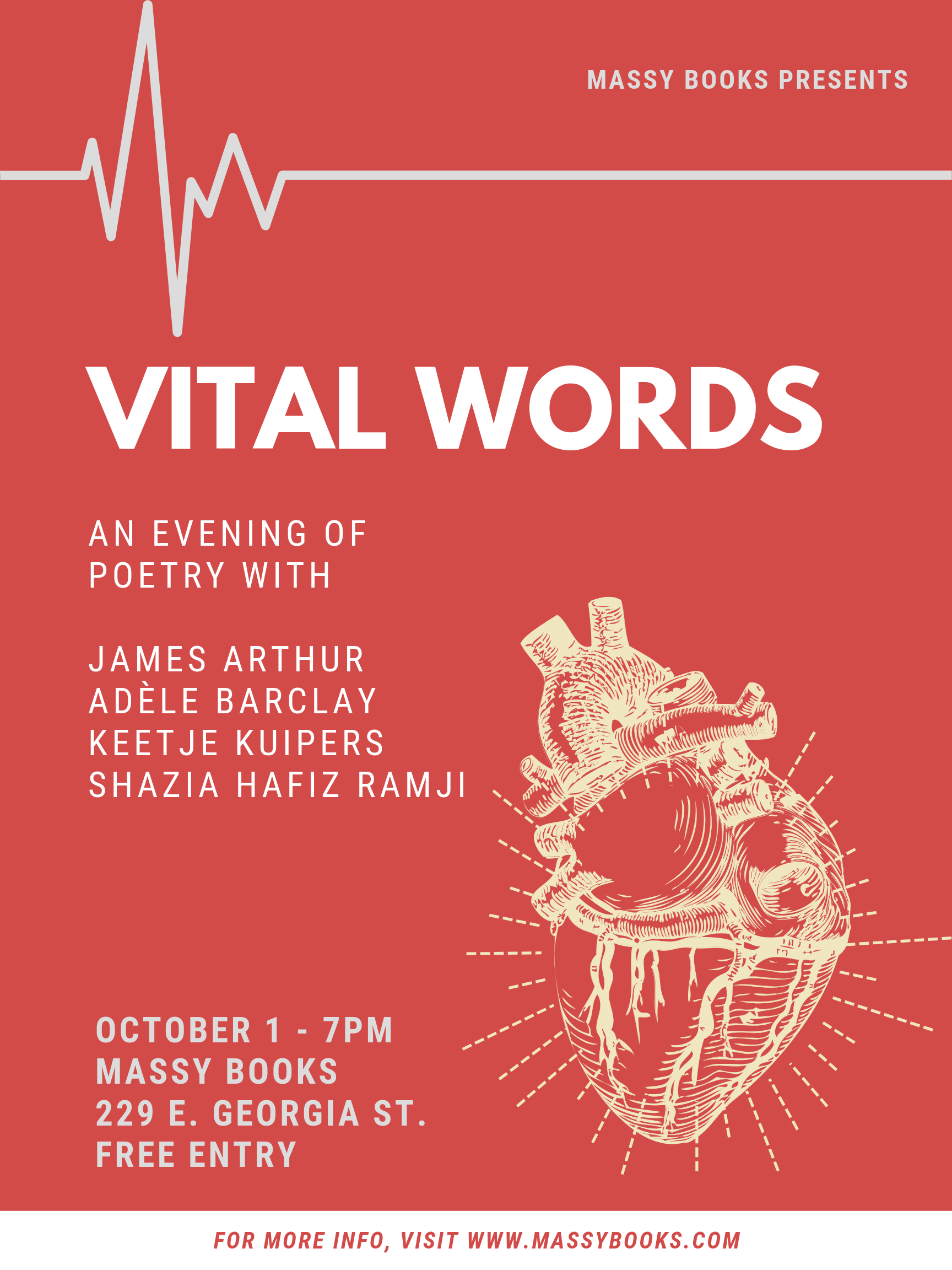 James Arthur was born in Connecticut and grew up in Canada. He is the author of the poetry collection The Suicide’s Son, forthcoming in Spring 2019 from Véhicule Press. His debut, Charms Against Lightning, is available from Copper Canyon Press. His chapbook Hundred Acre Wood was published in 2018 by Anstruther Press. Arthur’s poems have appeared in The New Yorker, The New Republic, Poetry, The New York Review of Books, and The London Review of Books. He has received the Amy Lowell Travelling Poetry Scholarship, a Hodder Fellowship, a Stegner Fellowship, a Discovery/The Nation Prize, a Fulbright Scholarship to Northern Ireland, and a visiting fellowship at Exeter College, Oxford. He teaches in The Writing Seminars at Johns Hopkins University.

Adèle Barclay’s writing has appeared in The Fiddlehead, The Heavy Feather Review, The Pinch, Fog Machine, The Puritan, PRISM international, and elsewhere. She is the recipient of the 2016 Lit POP Award for Poetry and the 2016 Walrus Readers’ Choice Award for Poetry and has been nominated for a Pushcart Prize. Her debut poetry collection, If I Were in a Cage I’d Reach Out for You, (Nightwood, 2016) was nominated for the 2015 Robert Kroetsch Award for Innovative Poetry and won the 2017 Dorothy Livesay Poetry Prize. Her second collection of poetry, Renaissance Normcore, is forthcoming from Nightwood Editions in fall 2019. She was the Interviews Editor at The Rusty Toque, a poetry ambassador for Vancouver’s Poet Laureate Rachel Rose, and the 2017 Critic-in-Residence for Canadian Women In Literary Arts. She is Arc Magazine‘s Poet in Residence and an editor at Rahila’s Ghost Press. She lives on unceded Coast Salish territory/Vancouver, BC.

Shazia Hafiz Ramji received the 2017 Robert Kroetsch Award for Innovative Poetry and was a finalist for the 2016 National Magazine Awards. Her writing has appeared in Quill & Quire, Vallum, Metatron’s OMEGA, The Puritan, and Canadian Literature. Her first chapbook is Prosopopoeia (Anstruther Press, 2017) and her debut book of poetry, Port of Being, is forthcoming from Insomniac Press in 2018. She lives on unceded Coast Salish land where she teaches creative writing and works as the poetry editor for PRISM International magazine.